NICom currently has just ended (31/12/2021) the Project Management (technical-administrative) functions of the C-Roads Italy project, co-funded by the European Commission within the CEF program 2014-2020 (Connecting Europe Facility), whose National Coordinator and Beneficiary is the Ministero delle infrastrutture e della mobilità sostenibili (MIMS) – Direzione Generale per lo Sviluppo del Territorio, la Pianificazione ed i Progetti Internazionali. The project was carried out with the participation of the following partners:

The pilot project C-Roads was developed together and in cooperation with the similar pilot projects of 18 Member States EU, under the coordination of the C-Roads Platform, on whose website further details can be found: https://www.c-roads.eu/pilots/core-members/italy/Partner/project/show/c-roads-italy.html

Furthermore since October 2018 NICom assumed the role of Project Management (technical-administrative) functions also for the C-Roads Italy 2 project (2018-2023), co-funded by the European Commission through the CEF Transport program. Such project is the prosecution of the Action 2016-IT-TM-0052-S, called “C-Roads Italy”.

The activity of Project Management in charge of NICom supports both the National Coordinator and Beneficiary, and the Companies and Entities involved in the implementation of the activities. Specifically, the main objective of “C-Roads Italy 2” is represented by the carrying out of a study and the execution of tests, mainly in real urban traffic conditions, with the involvement of the Cities of Turin, Verona, Trento and  some motorway sections, of some C-ITS services, called “Day1” and “Day1.5”, as defined by the European Commission.
Such services are for example:

To test these C-ITS services, it is necessary that the infrastructures are equipped with innovative technologies and also that the vehicles are equipped with systems capable of incorporating information to be supplied to the driver, together with vehicle control strategies. The vehicle connected to the infrastructure expands the knowledge of the driver and the vehicle itself on the traffic scene, increasing safety and the same traffic efficiency. The development of the communication architecture for the Vehicle-Infrastructure connection (V2I) will be based on a “hybrid” solution (ITS-G5 short-range standard and long-range cellular communication) as foreseen by the EU call for proposals.

Also for C-Roads Italty 2 the overall coordination for the European Roads networks (in particular technical specifications and standards) is performed by the C-Roads Platform.

Finally, the C-Roads Italy 3 project (2020-2023) was launched in July 2020, again with the technical-administrative coordination of NICom on behalf of MIMS.     It aims to begin the gradual operational extension on a wider national scale of the C-ITS services, making use of the experiences gained with the previous pilot projects. To this end, workstations and services will be increased on some motorways already partners of the C-Roads Italy pilot project, while new motorway sections (A1 – Bologna Firenze) and a new urban area (Roma) will be equipped.

The implementing bodies of this third phase are the following ones: 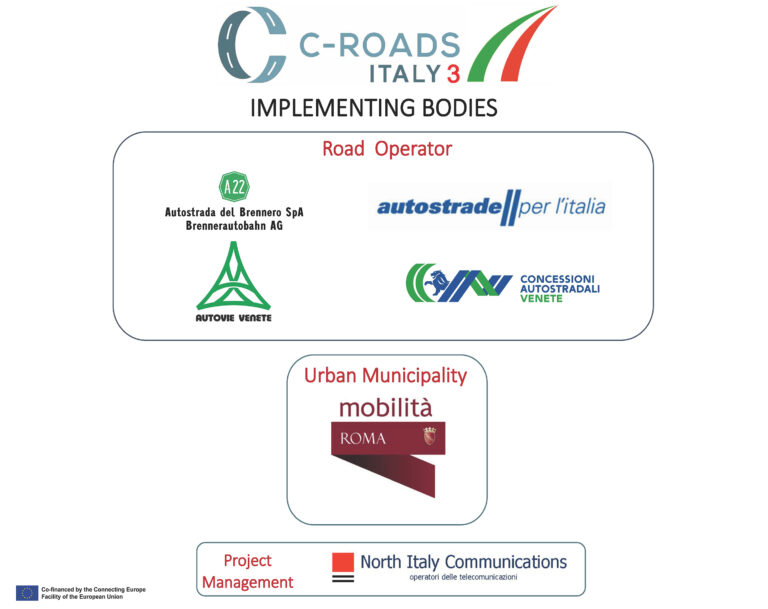 Furthermore NICom has provided and provides advice and support to the national coordination on the management of various other projects co-funded by the European Commission for the study and implementation of ITS technologies applied to the road transport sector, such as starting from 2006: